Peonies – the most popular and favorite brides flowers for bouquets and decoration. This is not surprising – lush, delicate in color and texture, they solemnly look and smell delicious. We decided to tell all about peonies and called the flower studio “Summer Day” to help us. The studio team shared the most important secrets: when to buy flowers, which varieties to choose, with what to combine and how to care for a wedding bouquet of peonies. END_OF_DOCUMENT_TOKEN_TO_BE_REPLACED

Freesia bridal bouquets have become very popular, successfully competing with more classic, traditional flower arrangements from, for example, roses. It is enough to see these magic flowers only once, to fall in love with them for their modesty and unique beauty. It is precisely the freesia that is most suitable for emphasizing the gentle, romantic image of the bride. In addition, they are quite persistent and able to preserve their impeccable appearance and charming aroma for a long time. END_OF_DOCUMENT_TOKEN_TO_BE_REPLACED

For many girls, a wedding is a celebration of a lifetime, and everything should be perfect and luxurious on it so that not only newlyweds but also invited guests will remember. The choice of flower arrangement for the bride does not stand aside. Habitual roses are no longer popular, and other fresh flowers come to replace them. END_OF_DOCUMENT_TOKEN_TO_BE_REPLACED

Since ancient times, when decorating weddings, special attention has been paid to flowers. With the help of beautiful and fragrant living decorations, you can easily emphasize the solemnity of the moment; give a lot of pleasant emotions to the newlyweds and their guests. Flowers are also used to create a bride’s hairstyle, and making a bouquet of a future wife can be called a separate direction in floristry.

When choosing a floral work for the bride, it is important to take into account a lot of nuances. This is the style of the celebration, and the color, the style of the dress, and the decoration of the event. A bouquet for the bride in different countries is considered a ritual attribute, with which many traditions, superstitions are associated.

A bouquet of the bride in the East

Wedding bouquet in Europe and tradition

Previously, the floristic composition for the bride was collected from herbs. It is believed that the tradition of making a bouquet of flowers from the bride was introduced by Queen Victoria. At the behest of this monarch, the flowers of the orange tree again began to add to the bouquet.

Historians say that around the time of the Victorian era roses were considered the main flower of love, romance. In this historical period, the brides began to hand over their bouquets to friends. This was done so that the couple could not bring damage.

In the Middle Ages in Britain, marigold flowers were often added to the bridal bouquets. And the petals of roses were used to shatter the newlyweds on their way to church so that their marriage was happy. 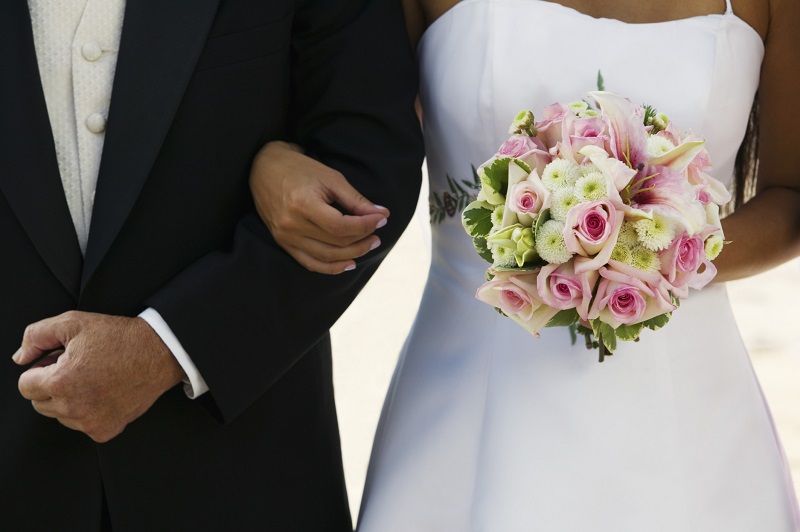 As for other European countries, there are some traditions associated with the bouquet of the bride:

According to the unspoken rule of floristic art, the wedding bouquet is decorated in light colors: they emphasize the bride’s innocence

Traditions of wedding bouquets in America

Wedding bouquet of the bride first started throwing unmarried girlfriends in the USA. A very beautiful ceremony was accompanied by a wish to meet a loved one lucky woman who will catch flowers. Today, more often than not, the bride passes on to her guests not her own bouquet, but a bouquet double. As a rule, it looks like a real wedding bouquet. 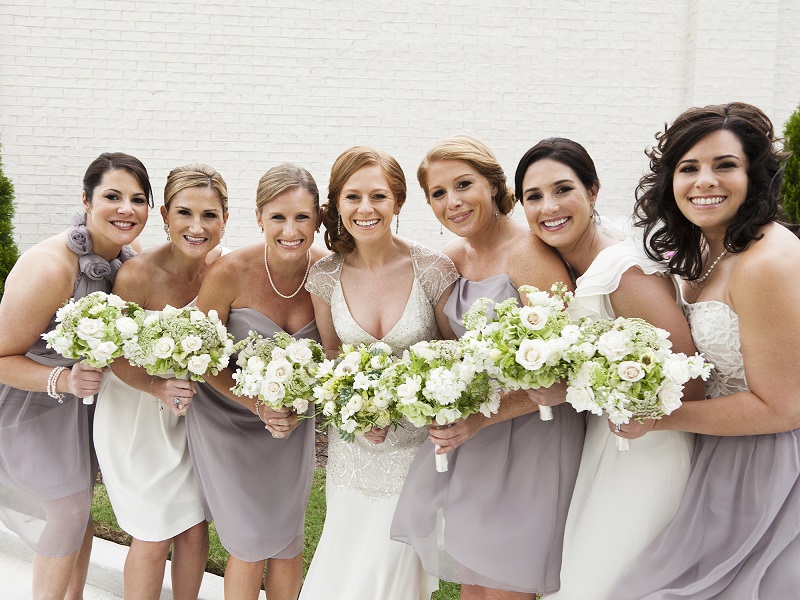 By the way, throwing flowers future wife can be original. For example, she can choose the hostess of the wedding attribute with the help of an attraction, comic contest or competition.

The effective tradition of throwing a wedding bouquet to bridesmaids originated in America, today it is popular in many countries

Bouquet for a wedding in Russia

Few people know that in Russia there was a similar wedding ceremony. According to ancient traditions, unmarried guests at the end of the evening gathered in a circle in the center of which was the bride. She was blindfolded, after which the friends of the happy bride began to dance. When the dance stopped, flowers were received by the girl who was closest to the bride.

In general, the Slavs did not have a traditional wedding bouquet. He was replaced by a flower wreath. It is a symbol of the sun, which promises a happy and long life to the newlyweds. Most often, for wreaths of a wreath of the bride used healing flowers and herbs, each plant had its own significance. For example, fresh chamomile symbolized strong love and the spikelets of rye – wealth.

The secret tradition in many countries is the use of colors of light and delicate shades when drawing up a wedding bouquet. However, modern brides can show fancy when choosing the model and materials of the future bouquet. It is important only that the work created by the florists pleases the eye and harmonizes with the image of the girl.